17-19.1.The 6th World Wooden Ski Championships, known as caves in the Czech Republic, took place in Leogang, Austria. Czech participation in this competition dates back to the second year held in 2006. At that time we thought that we could not escape success, after all, who at this time can do wooden skis with strap binding? And in the Alpine countries, the old guys are just as young as they are, so we come back with the incredible experience of a three-kilometer free terrain downhill, but without any better location. Over the next years we were gradually improving and tuning our wooden skis to give us a chance to compete a little. In 2010, Kim (Jiří Benedikt) finally managed to bring the Czech Republic the first medal from the downhill and combination and another nice finish in the top ten. These results have already given us hope that perhaps one of us could reach the highest stage.

We did not leave anything for this year's race by chance and we did our best to prepare the skis. Unfortunately, due to the tragically warm weather, we did not have much chance to train, but as we had news from Austria, they are not much better either. We can only rely on the experience of past races in the Alps and also races in our country in Olešnice v Orlických horách, which were created just at the suggestion of friends from Austria and Slovenia.

In the end, a 10-member excited team of Czech competitors + one photographer arrives in Leogang. Our Dutch funclub also arrives from the Netherlands to Leogang, which once brought us to the attention of these races and without which we would probably never have gone. Friday night is the official opening and then social entertainment until late in the morning. After all, there come racers and friends in one person from many countries who do not see each other very much outside this championship and so it is necessary to catch up.

Of course, on Saturday morning nobody wants to get up very much, but nothing can be done; We move to the slope, pick up the starting numbers and give as many training rides as possible. Then just the concentration before two SG competition rounds. After the first round the situation looks almost unbelievable, four of our competitors in medal positions! That would be something! In the second round, however, the organizers include a high jump and he shuffled the order properly. Some of us come from medal rankings, but fortunately we don't have to mind that, because we will be replaced only by competitors from the Czech team. The result of the first day is 4 medals of which 1 gold. In the most prestigious category men under 50 years with skis without metal edges we even occupied the first four places! Already this was a great success, but we were all waiting for the second race day and the classic slalom, which together with this race counts into the combination. Therefore, we prefer not to exaggerate the celebration and go to sleep "early" in the morning

About 170 competitors entered the slalom, which was about 40 more than the previous day, so we had even more competition. The slope was beautiful weather, which allowed skiing without long sleeves and especially perfect racing atmosphere, which diversified three live bands. With regard to the number of competitors, only one lap will be held, but even in this case the competitors will face a treacherous jump, which most of the competitors will not manage and will be significantly reflected in the results. Our team was quite nervous, because those who won the day before, wanted to build on success and make a great result in the slalom and overall combined. And then there were those who failed and wanted to make up for it at least in the slalom, because the combination was already minimal chance. The result was performances on the very edge and the associated super experiences, achievements, but also crashes and some bruises.

The results after this race, which was hop or trop, were again victorious for the Czech colors, although the placement was a bit confused. Among the men it was again four medals, and among women it just from the fourth place Verce just escaped. Now it was only possible to guess in which order the Czech competitors will rank on the podium in combination. They were very close results, but they spoke very clearly, our team dominated one category and took silver from the other. Among the women again, they were unfortunate potatoes, but hopefully it would be a bigger challenge for the next time. The final ceremony on the ski slope was already one big celebration, all the winners were given large glasses of beer, up to three liters, so in the end virtually everyone passed from the winning trophy. When announcing our main category, the organizers made us very happy because they prepared for our top three Czech anthem, which has never played there before.

During the farewell to the organizers and other competitors, we were assured of all that next year we will see each other in Olešnice in the Orlické Mountains, because the World Championship takes place in two years and so our race is the biggest attraction for next season. After all, we are the only non-Italian country to hold a similar international race and have a cheap beer For us a great challenge to show up as good organizers too!

Categories up to 55 years

Photo of our representatives: 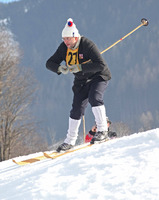 We use cookies to enable the proper functioning and security of our website, and to offer you the best possible user experience.